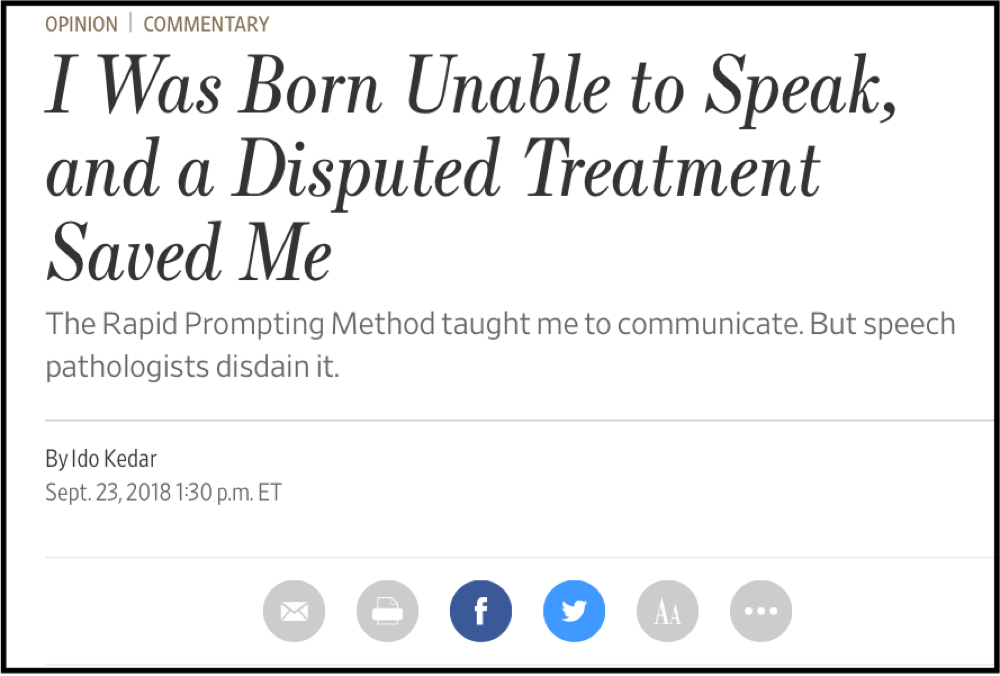 Mom just read this awesome article to me that Mrs. G. managed to find! He’s mainly different than me but we’re both smart and have trouble talking. He’s so right about therapists getting it wrong!

I Was Born Unable to Speak, and a Disputed Treatment Saved Me

The Rapid Prompting Method taught me to communicate. But speech pathologists disdain it.

I have nonspeaking autism, which means my ability to communicate verbally is limited to a few words and well-practiced short phrases. Thanks to apraxia, even that is mostly unintelligible, except to those who know me well. While no one demanded that Stephen Hawking rely only on his speech to prove his smarts, it’s different with nonspeaking autism. Because we are born trapped, we never had the chance to prove ourselves before losing the ability to speak.

When I was a toddler, my parents were told I had a receptive language processing disorder and possibly a cognitive disorder, too. I was drilled endlessly at the most remedial level. This might have been OK if I actually had a language processing disorder and didn’t understand basic concepts, but my disability is something else entirely. I have always understood speech. I have insight and I’m intelligent. I just couldn’t demonstrate this in my drills because my body didn’t enable me to speak or move the way I wished. So I spent a lonely childhood listening to specialists who misunderstood everything about me, unable to defend myself by communicating.

My intact thoughts don’t transmit reliably to my motor system. I want to speak, but I cannot. This has robbed me of autonomy, imprisoning me within my own uncooperative body. To compound the problem, my autism comes with strong involuntary compulsions like waving my arms in excitement. My odd-looking movements only worsened the specialists’ perceptions of me. The experts, who held such power over my young life, were always confident in their theories. Until I was 7, I had no means to disprove them or convey my thoughts at all.

What liberated me was the Rapid Prompting Method, or RPM. Through it I learned how to move my arm to touch letters to communicate, first on a letter board, then on a keyboard, then on a tablet with a voice-output app. The process of learning how to control my unreliable hand for the purpose of expressing myself was gradual and painstaking, but it was worth it.

Yet the professional organization of speech-language pathologists has denounced RPM. The American Speech-Language-Hearing Association, or ASHA, claims RPM has not yet been validated by testing, asserting “there is no evidence that messages produced using RPM reflect the communication of the person with the disability,” rather than that of their helper. Yet my partner merely helps me to maintain my focus. I move my own arm, untouched. The thoughts I express are my own. Many typers, myself included, have progressed steadily in skills, fluency and independence over time. It’s documented in films and evident by observation. We are not exceptions but indications of what could be possible for many more suffering children.

Slowly touching letters with one finger has transformed my life. With this skill, I escaped remedial education, became a general-education student, and graduated high school with honors. I now take college classes. On my iPad, I’ve delivered speeches at universities and conferences. I’ve written two books about autism. My first, “Ido in Autismland,” a memoir I wrote as a teenager, has been used in university classes. I released my second book, a novel called “In Two Worlds,” in July, shortly before ASHA released its position paper discrediting RPM.

“In Two Worlds” takes the reader into the head and heart of Anthony, a nonspeaking boy underestimated by everyone. Though his parents comply with all the recommended therapies, Anthony improves little and loses hope. At the late age of 16, he learns to communicate by touching letters, but his family endures skepticism and opposition from the professional community. The book shows how confirmation bias is a huge problem in autism treatment. ASHA’s recent announcement has further validated this point.

Speech therapy, which I received to no effect for more than 10 years, is ASHA’s endorsed path to communication. But if my family had relied only on that, no one would know I was even in here, intact under the quicksand of autism. Through letters I became a free soul, not one limited to a few unclear spoken words. It would now serve ASHA well to listen to the voice that RPM gave me.

1 thought on “Another Smart Guy”